Day two of my super quiet recover-from-show-and-press-week-and-get-the-flat-back-under-control weekend, and I’m enjoying the downtime much more than I expected – turns out that sleep and solitude were exactly what I needed to feel like myself again. But that doesn’t mean I’ve been still – as well as working my way through the to-do list of all to-do lists of chores, I also went out for another run.

I’ve decided yesterday that on my next outing I would head straight to the canal towpath, and so once I got to the park I padded down the steps and went on my way. It was earlier in the morning than my last run, and cold to boot. The water was still largely crusted with ice, and weak sunlight streaming through the trees gave my route an almost misty look. 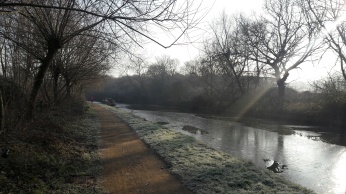 I was in a fidgety mood today, and it took me a while to settle into the run – lots of little things were niggling at me; first the armband that I carry my phone in was too tight, and then my hair wasn’t secured tightly enough, bobbing irritatingly as I jogged along the towpath. But once I got into it, it was a lovely outing. Further along the river the water was more open, and I saw a noisy mix of ducks, coots, moorhens, and a single swan bobbing about in gaps in the ice.

As I was taking a more direct route today, I got to the railway bridge in good time and had time enough to push on further to see what lay beyond it. The answer: another bridge! About two runs and two walks in, I reached a really pretty red bridge, criss-crossed with white. This was the furthest along the towpath that I’d run so far, and I noted it as a good waymarker before turning back.

I had one last 5 minute run to take me in the other direction, and by the time this was over I was sort-of-nearly back at the steps, so I challenged myself to keep going. Unlike yesterday, this time I knew what the bridge beside the steps looked like, and so I aimed for that structure, pushing myself on. It was hard – really hard – and by the end my breathing was ragged, painfully sucking in great lungfuls of cold air – but then (at last!) I rounded a bend and saw the bridge before me.

One last push! I forced myself the final 50 yards or so, and I won’t pretend I enjoyed it, but my goodness the feeling of triumph as I hauled myself back up the steps to the road – wheezing a smile at an amused dog walker – was awesome. 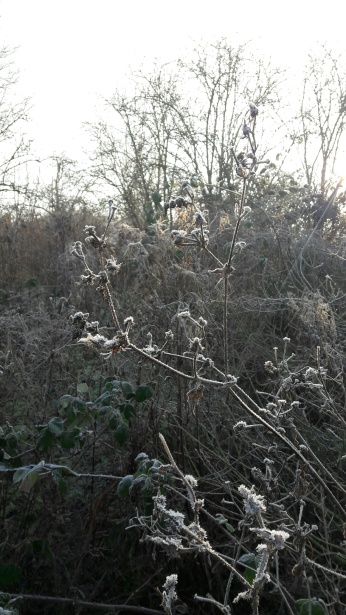 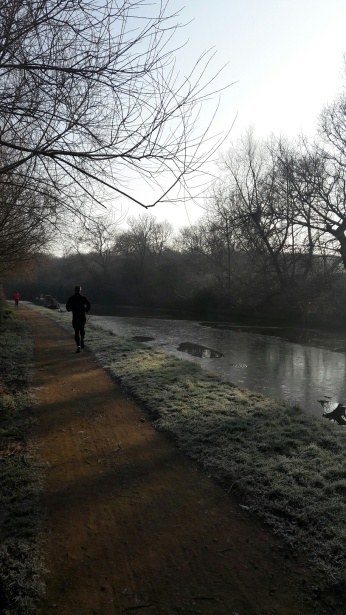 I was properly out of breath, and there was no chance of running the journey home, but I treated myself to a podcast (right now I’m enjoying Lore, which is about the often odd history behind folklore and urban legends) and had a really nice walk back. Yes, my diaphragm was tight and uncomfortable; yes, my legs had a slightly springy weakness like overstretched rubber that made my walk bounce eccentrically, but I was buoyed along by a sunny sense of achievement, and the elated cheeping of little birds in the trees.

I feel like I really pushed myself today – but I’ve definitely taken some small steps towards progressing to the next level, I’m sure!

Where to now? Onwards and upwards, of course!